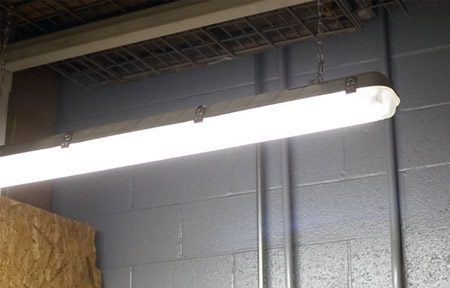 Vapor tight lighting fixtures are popular in extreme environments containing unusual amounts of dust, dirt and moisture. Common applications are farms, parking garages, manufacturing facilities and any place exposed to the elements. While similar to LED strip lights, they differ in that they use a sealed housing, preventing the ingress of moisture and particulates. These fixtures feature a clear lens which is sealed to the housing itself using a rubber seal around its perimeter and is held in place by multiple clips. It should be noted that vapor tight fixtures are not the same as vapor proof fixtures, which are designed for use in areas where there is a high possibility of impact or chemical damage.

Straits offers premium commercial quality LED vapor tight fixtures that come in multiple lengths depending on the lighting application requirements. These fixtures use single ended T8 size tubes without the ballasts associated with fluorescent tubes used in traditional fixtures. Our fixtures come without LED bulbs, which allows the user to select the ideal tube for their application. Straits X-series LED 8 tubes are an excellent choice for these fixtures, which offer varying wattage, lumen and color temperature options. Our fixtures come with a 5 year warranty and carry an IP65 water resistance rating.

Vapor tight fixtures are useful for any area that’s exposed to harsh environmental factors such as high levels of moisture. Here are a few specific applications for this fixture.

For those looking to improve the efficiency of their lighting setups and reduce maintenance costs, there is no better choice than LEDs. While the upfront cost of LED vapor tight fixtures is notably higher than their fluorescent counterparts, the lifetime costs are dramatically lower. The efficiency of LED tubes is approximately 30% better than equivalent fluorescent tubes, which in and of itself can justify the switch to LEDs due to annual utilities budget savings.

However, in addition to this the maintenance requirements of LED lighting are far lower, often requiring zero maintenance throughout their rated service life of 50,000 hours. By comparison, T8 fluorescent tubes typically have a lifespan of around 30,000 hours before needing to be replaced, and also require an external ballast that needs periodic replacement - involving the removal and disassembling of the entire fixture. The dramatically reduced maintenance requirements of LEDs is very appealing to users of vapor tight fixtures, due to the fixtures often being placed in locations that are hard or time consuming to access.

Another benefit of LED lighting is the improved quality of the light produced. Fluorescent lighting is known for “flickering”, which is an undesirable characteristic that is caused by the way in which fluorescent tubes generate their light. Essentially, fluorescent tubes switch on and off 120 times per second (120 Hz), which is imperceptible to the naked eye but can cause headaches, irritability and discomfort for individuals exposed to it for long periods of time. This immutable characteristic of fluorescent lighting is not present on LED lighting, as it does not rely on switching to function.

Talk To An Expert Let our experts help you with your LED lighting needs.
Quick Links
Save Your Energy.   Save Your Money.
Copyright © 2022 Straits® Lighting | All Rights Reserved | Privacy Policy | Terms & Conditions
1