LED tube lights are categorized by several factors. These factors include: the size of the bulb, color temperature, and ballast compatibility. We’ll explain some of the main differences below.

LED Tube Sizes - These are the same size, shape and appearance as existing fluorescent tubes. They are specifically made to be direct replacements for fluorescent units, or to put into new LED fixtures. The sizes of LED tubes are named in the same manner as fluorescent tubes, the most common being T5, T8, T12 sizes.

Type A / Plug-n-Play - This is the easiest form of upgrade to existing fluorescent lighting, as it requires no modifications to the fixtures or ballasts to complete. Using these is as simple as removing the existing bulbs and lamps and snapping in the LED tubes.

Type B / Direct Wire - This is more involved, bypassing the existing ballast entirely. This requires the rewiring of the fixture to accept the new bulbs. The long-term costs are noticeably lower, as you no longer have ballasts to replace.

Type A/B - This is a hybrid type of bulb, allowing installation in fixtures with or without ballasts. Because of this flexibility, these types of bulbs are quickly becoming the most popular choice in the LED tube market. 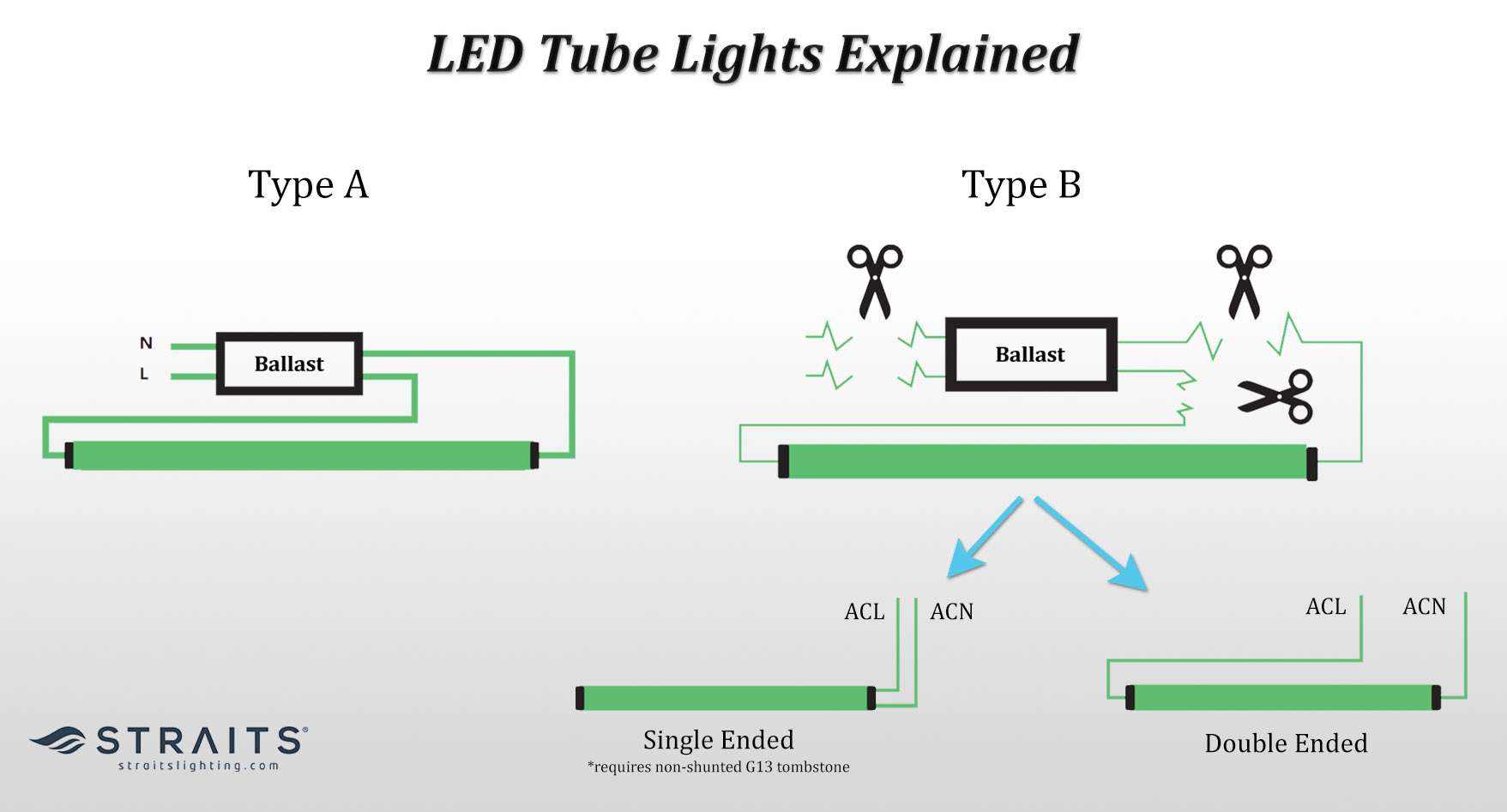 X-Series/MX-Series LED T8 Tubes - These are some of our most popular tubes on the market, as they allow for installation in fixtures with and without a ballast. These are also compatible with both double ended and single ended wiring setups. This is convenient for those who do not know how their existing fixtures are wired, or for those who would like the option for single ended wiring.

Streamline NX-Series LED T8 - Similar to our X-Series/MX-Series tubes, these will work with or without a ballast. They only work in fixtures wired for double ended bulbs, so make sure your fixtures are wired correctly.

Streamline LED T8 U-Bend - Designed to replace existing U-Bend fluorescent lights, these LED bulbs are single ended and will require the replacement of one G13 socket to a non-shunted version to complete installation.

Streamline Plug & Play LED T5 - These replace existing T5 fluorescent tubes, requiring zero modification to the existing fixture. These are Type A only, which means they cannot be used without a traditional fluorescent ballast.

Tube lighting is a popular type of light for commercial and industrial applications throughout the world. Since their inception in 1903, tube lights have generally been of the fluorescent type. Fluorescent tubes are low-pressure mercury vapor gas discharge lights, which generate light by running electricity through mercury vapor and generating short wave ultraviolet light. This then causes the phosphor inside the light to glow, producing visible light.

In recent years, fluorescent tubes have had stiff competition from LED tube lights. There are significant differences between these two types of tube lights, which impact not only cost considerations but quality of the life for their users. While many choose fluorescent tubes due to their low price, this is a false economy as they have a dramatically lower life expectancy than LEDs. Fluorescent tubes typically have a lifespan of around 30,000 hours at best - often less if they are exposed to extreme temperatures and environments. LEDs on the other hand, last far longer with lifespans of around 50,000 hours and more. They are not as sensitive to temperature extremes and on/off cycles as fluorescent bulbs, which helps to further improve their longevity.

Another difference in fluorescent and LED tubes is the difference in energy consumption. Generally speaking, LEDs consume about 20% less energy than a comparable fluorescent while producing the same amount of light (lumens). This adds up to quite a large savings over time, making LEDs a smart choice for building managers and business owners trying to reduce energy expenditures and tighten up their annual operating budgets.

The last difference between the two types of tube lights is the difference in quality of light. In the lighting industry, the quality of a light is measured using the Color Rendering Index (CRI), which basically measures a lights accuracy in reproducing color. This is measured on a scale going up to 100, with natural sunlight and incandescent bulbs having a CRI of 100. Fluorescent tubes generally have a CRI of up to 70, which is acceptable but not great. LED tubes on the other hand have a typical CRI of 80-95, which is a dramatic improvement. This makes for not only a safer workplace due to better visibility, but also a more pleasurable environment for customers and employees as a result of less eye strain and better color rendering.

Talk To An Expert Let our experts help you with your LED lighting needs.
Quick Links
Save Your Energy.   Save Your Money.
Copyright © 2023 Straits® Lighting | All Rights Reserved | Privacy Policy | Terms & Conditions
18