For nearly 100 years, fluorescent tube lights have been the standard form of lighting for commercial, industrial and retail users. Compared to incandescent and other older technologies, fluorescent tube lights were a welcome upgrade when introduced due to their huge improvement in energy efficiency as well as their ease of installation and maintenance. Practically every type of lighting application in existence has at least several of these fixtures in operation, speaking to its widespread global popularity.

However, times have changed and with fluorescent technology at its maximum potential, newer and better lighting technologies such as LEDs have come to surpass its position as the number one choice in general purpose lighting. In fact, LED tubes are the number one replacement light for existing fluorescent tube fixtures. There are several reasons for this, mainly due to its boost in efficiency, longevity and the higher quality of light it produces.

Making the switch is a simple and straightforward process, with most LED fluorescent tube replacements being drop-in with no need for rewiring or retrofitting. The majority of current offerings have the option to use existing ballasts or wire around them if desired. There are even LED specific tube fixtures available for those who desire tube lights but would like to replace their aged existing fixtures.

Reasons for Switching to LED Tubes 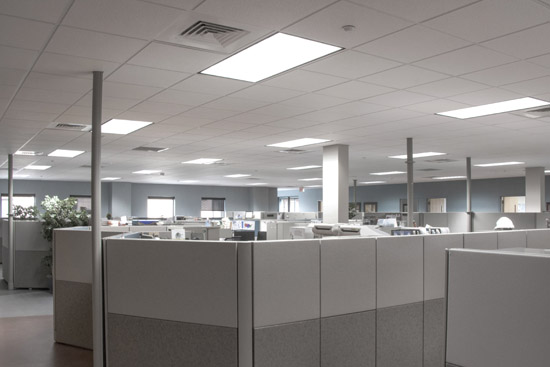 There are several reasons why converting existing fluorescent fixtures over to LED technology is a solid choice. To start with, LEDs are on average 70% more energy efficient than standard T8 fluorescent lamps. This reason alone is enough to make the switch over to LEDs, as the cost savings in electricity can pay for the upgrade several times over within the first year, especially for large scale installations. Additionally, LEDs have a much longer lifespan and require zero maintenance – resulting in additional cost savings for the user.

Another key selling point for LED fluorescent tube replacements is the quality of light produced. This improvement is especially noticeable when compared side by side with fluorescent technologies, due to the higher Color Rendering Index (CRI) rating of LED tube lights. CRI is the measurement of the accuracy of a bulb in replicating natural sunlight – which has a CRI rating of 100. While most fluorescent lights have a CRI of around 70, LED lights have a minimum CRI of 80, with many reaching into the 90 range. While it may not seem like a large numerical difference, it is actually a very large difference in real world conditions.

On top of the improvements in CRI, there is a fundamental difference in the manner in which LEDs and fluorescent lights function which makes it impossible for fluorescent lights to compete in terms of lighting quality. As part of the nature of their function with ballasts, fluorescent lights constantly are switching on and off, at approximately 60Hz. While not consciously perceptible, the human eye reacts to this, causing eye stress and fatigue.

In a commercial or business setting, this switching can reduce employee satisfaction and efficiency, ultimately having a negative impact on the company’s bottom line. With LED technology, none of this occurs as it relies on solid state semiconductor technology. The difference is readily apparent, especially over a full eight to ten hour workday. Considering all of these advantages of LEDs, replacing fluorescent lights with LED tubes is a bright decision for any application.

Categories
Recent Posts
Talk To An Expert Let our experts help you with your LED lighting needs.
Quick Links
Save Your Energy.   Save Your Money.
Copyright © 2022 Straits® Lighting | All Rights Reserved | Privacy Policy | Terms & Conditions